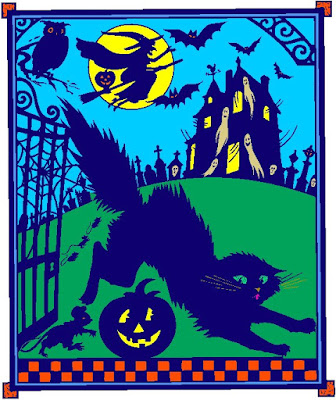 Hello All! Halloween will be here soon! Most of the leaves have been blown off the trees and they have that spooky look to them in the dusky evenings. That chill in the air and the pumpkins sprouting on every porch is a sign that it's time to go to Costco and buy about 10 pounds of candy...

Because soon the little trick or treaters will be pounding on the door! But first this message from Dot and Guy, my two favorite furry friends.... 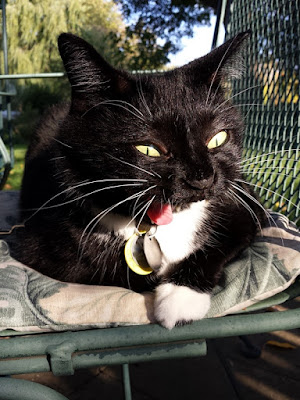 Black cats are a scream! So says Dot in the photo above! Well she was actually yawning, but since this is a Halloween post, lets pretend she's screaming a nasty old cat scream. What can I say? I love cats, and am very lucky that I've had several black cats over the years.  So Dot and Guy want you to show some love for a black cat or dog this time of year and celebrate and appreciate their unique place in this crazy world! 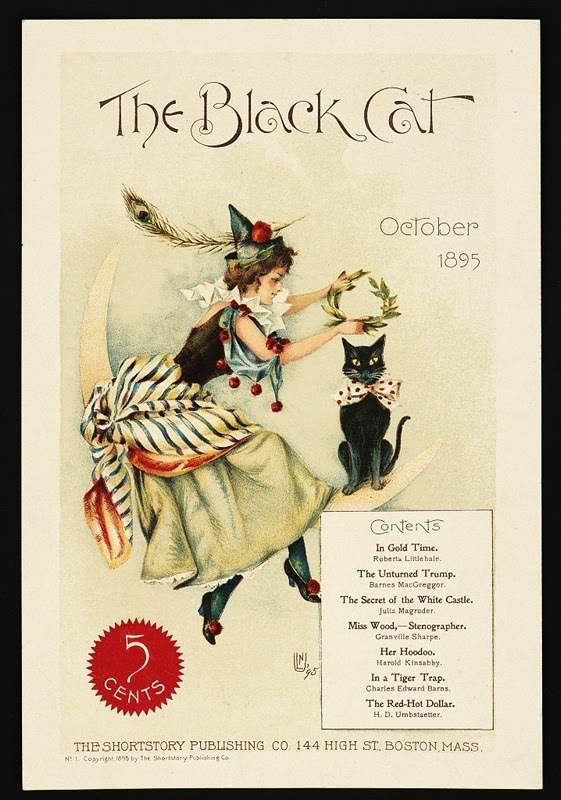 Black cats have been associated with Halloween for a long time, and originally not in a good way.  Over the years we have come to love seeing black cats in all types of advertising. 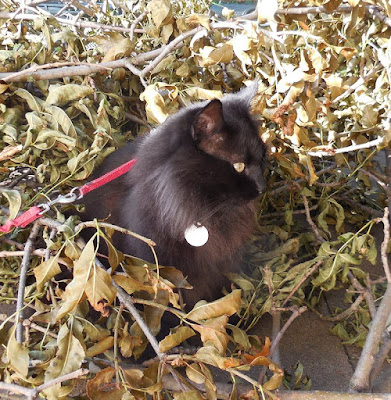 Here's is my other black cat, Guy Noir.  He loves to help in the yard. As you see, he was helping with some tree branches and thought they would make a good cat lair. What better way to surprise the poor chipmunks, but by leaping out at them from within this twiggy mess! 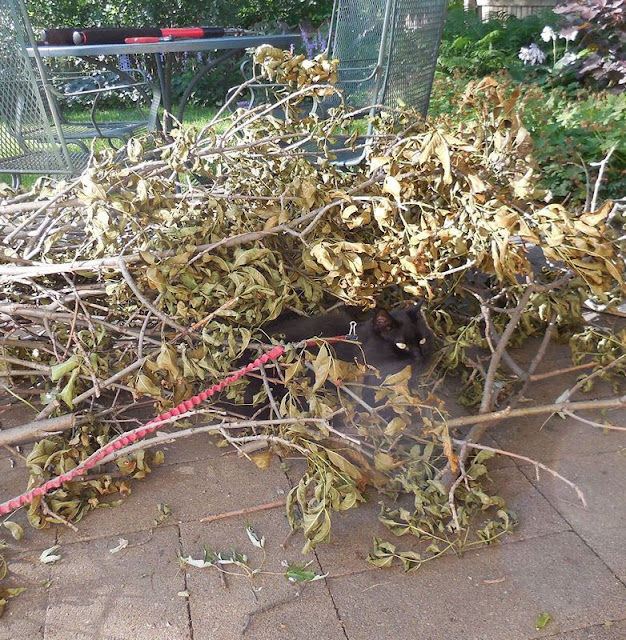 Below are just a few random images I've picked up over time...
from books, old photos and ads. 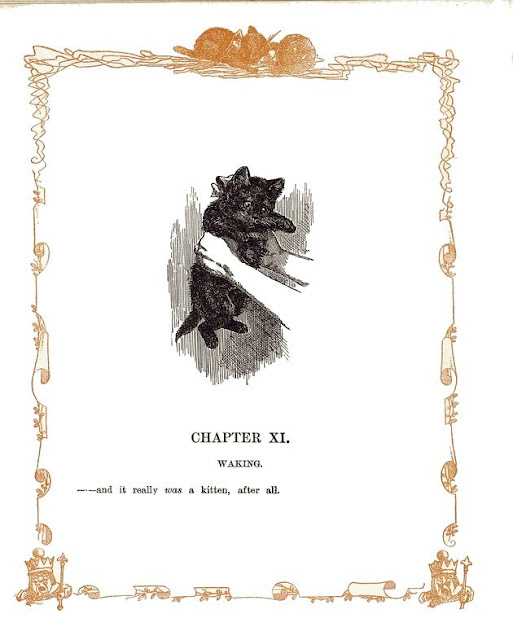 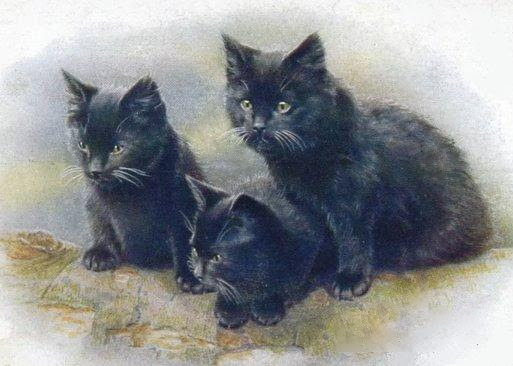 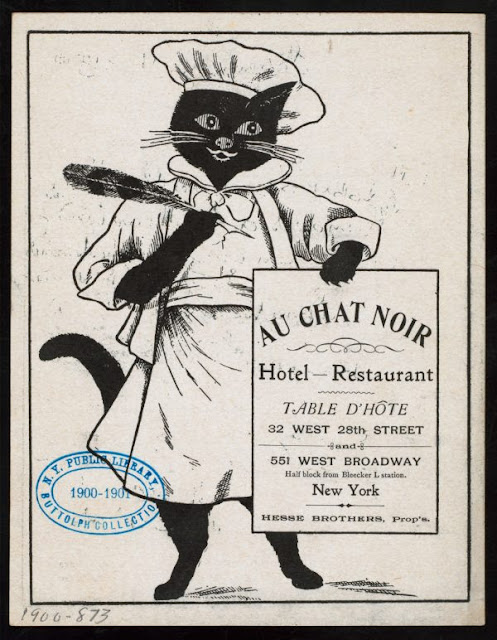 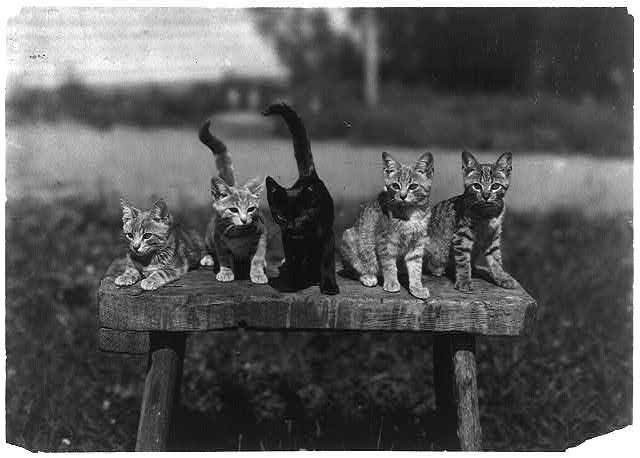 I really like this old photo of the litter of kittens, all striped, except for the one in the middle.  Sometimes it's better to stand out in a crowd! 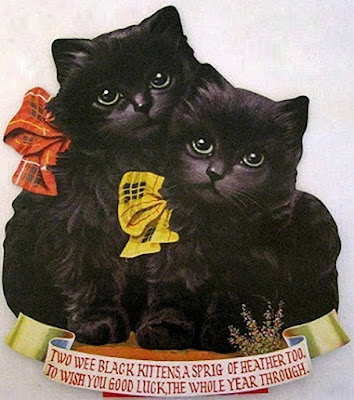 Happy Halloween my friends!
Hope you have a spooky-good time!
~~Diane~~


*some images from public domain The Library of Congress
Posted by CraveCute at 8:08 PM 17 comments:

I Sailed on Lake Superior and Lived!


Sailing the Apostle Islands...
was interesting. Our Captain and friend chartered a boat from Superior Charters.  We had a 33 foot Jeanneau, our Captain wanted a 38 foot, my hubby wanted the smaller... This will be important later..

There were five of us on the boat. A couple, who are sailing friends of ours (he was our Captain). Then there was my husbands brother, my husband and myself.  They are all good sailors, I am good ballast. I do know the basics of sailing, but I'm really only a fair weather sailor. I don't like big waves or rain and some of the technical things about sailing frankly bore me.  I love the fresh air and the fact that under sail there is no motor sound to ruin the esthetics of being out in nature. 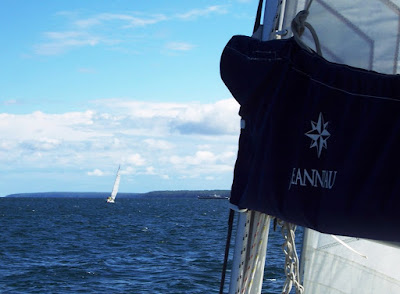 The Apostle Islands area is located in Lake Superior, the area consists of 21 islands and 12 miles of mainland. We spent much of the time sailing around Madeline Island.  The second day when the waves were too big for us girls, we headed to the Island to visit the shops and museum, but more on that later.

Things you should also know;  I had never spent a night on a boat or sailed on Lake Superior before, so I was pretty nervous about the whole thing. I've only been camping once in my life (also with husband) it was terrible. There was a skunk, need I say more...

The image above is of the type of boat we sailed on.


The sights were nice and the days were mostly sunny and warmish.  The nights went from stuffy and warm to cold.  The boat seemed bigger in the pictures, but once aboard our sleeping area was quite cramped. Plus you practically have to do a back flip to get in and out of the bed.  Me doing any kind of flip is quite funny! Did I mention I have phobia's?


View of the interior facing the V-berth in the front of the boat.

Claustrophobia... the fear of enclosed spaces. I've only started to become more bothered by this in my older years, when in my 20's it really didn't affect me at all. When I worked for the hotel reservation service, the building was set up to have a crawlspace under the floor so that we could run more co-axe cable as we added new computer terminals and lines as the center grew. I and a few others in our tech department would take off a floor panel and pull the cable under the floor, by crawling, barely able to be on hands and knees it was that tight. The other people in the department would hold a flashlight down for us to direct us to crawl to the opening in the floor. Now that I think of it, it seems terrifying!

Anyway the sleeping compartment in the V-berth gave me that sense of the walls closing in and we had to keep the compartment door open. Remember I said our Captain wanted a 38 foot boat? That would have given us a bit more room... So that was the first night. We spent the next day sailing 8 hours non stop...

The next night I slept out on the bench seating in the midships area of the boat, or the "saloon" as it's called. Oh and did I mention that my dear hubby snores? It was like an echo chamber in there! So sleep is not something that happens on a boat apparently! I slept better on the bench, but the hatches above were open because when we first went to sleep it was hot, but as the night went on it got down right cold. 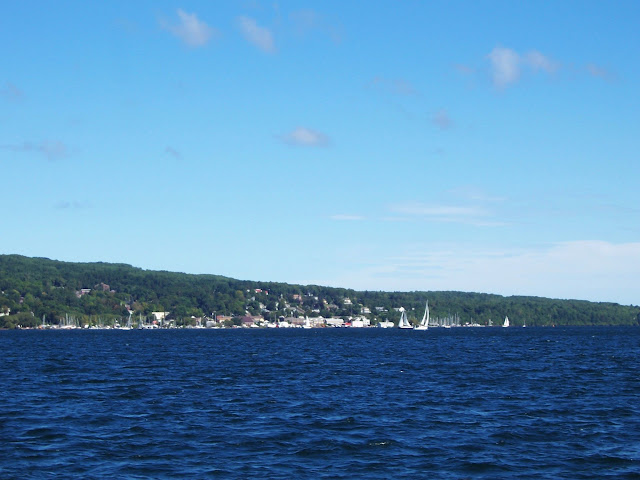 A view back towards Madeline Island.  The photos below are a few other sail boats we saw while sailing. My husband was taking pictures on his old camera and unfortunately many did not turn out when the battery started to go. 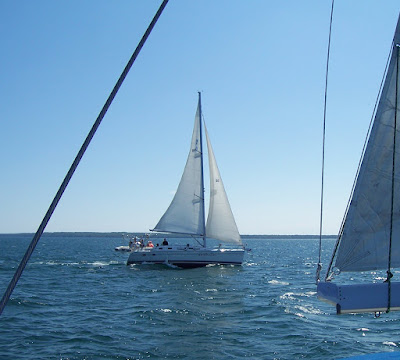 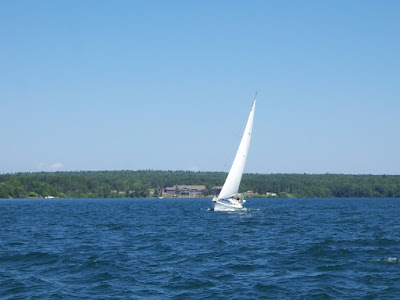 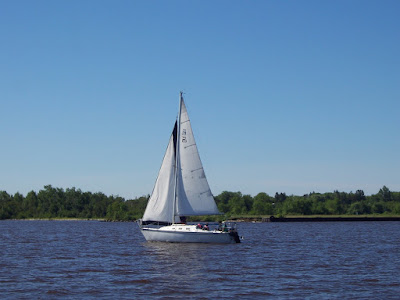 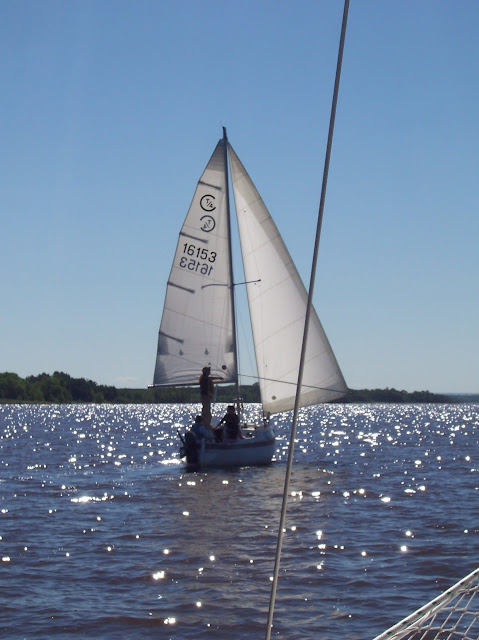 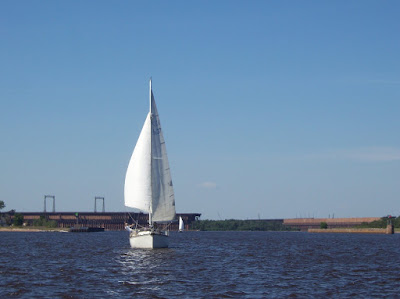 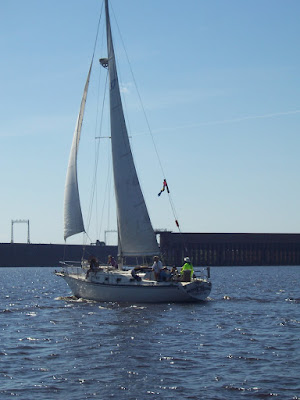 While the guys were doing their dare-devil sailing, my girlfriend and I took a ferry out to Madeline Island, we walked around a bit and headed down a trail through the trees, it was nice to be back on land again!

The photos below were taken with my phone. 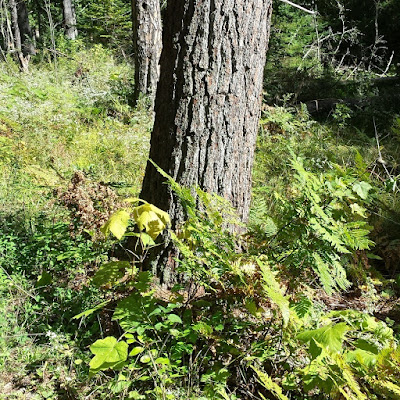 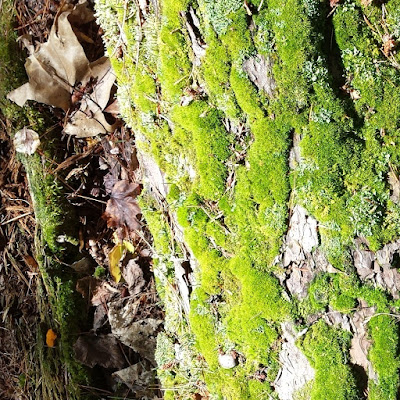 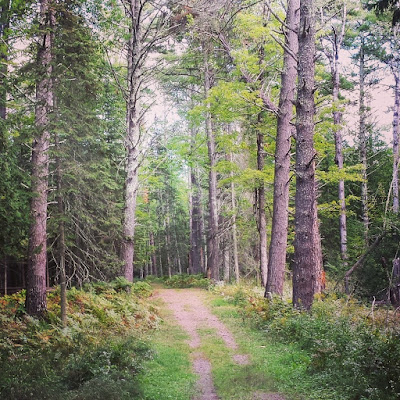 We visited the Madeline Island History Museum and checked out some of the fantastic beaded Native American artifacts on display. The Ojibwe are the dominant tribe in Wisconsin as well as Minnesota. After the museum visit we had some lunch and then caught the ferry back to the marina and met the guys right when they were sailing back in. 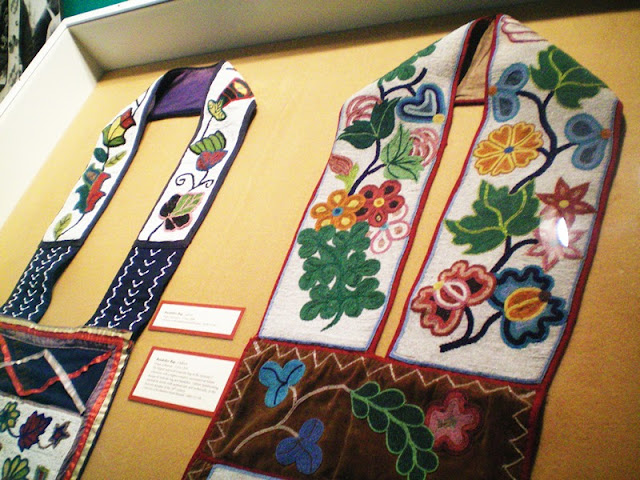 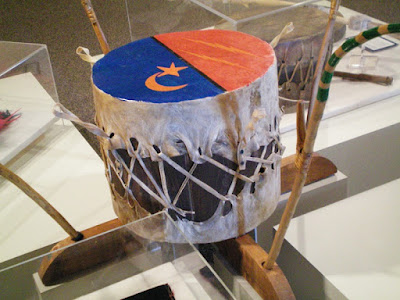 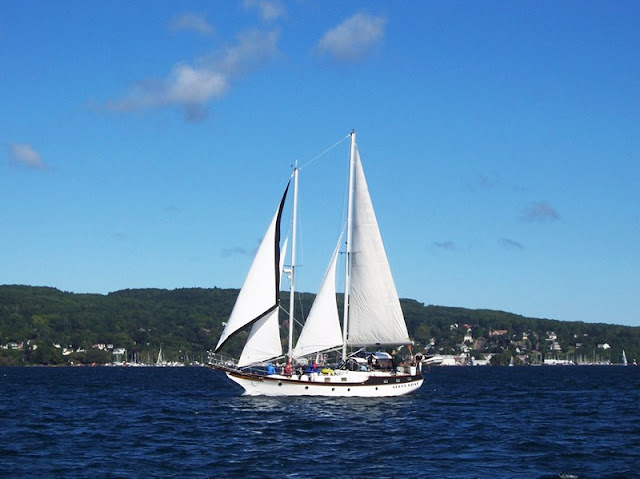 Another beautiful boat we saw while sailing...


We were on the boat for three nights and the third night was horrible for me, I had come down with a sinus infection and felt terrible. All that cold air blowing over me at night must have finally gotten to me.  I didn't sleep and thought the night would never end!

I spent the next day below deck while the rest of the folks sailed until around 2PM when we sailed into the dock and turned the boat back to the charter company. We then drove 5 hours back home where after a shower and some medication I went to bed and slept for about 12 hours! And as a true introvert and HSP, highly sensitive person, I'm never leaving home again...

P.S.. Want to know if you're a highly sensitive person? Take the test...
Click Here. 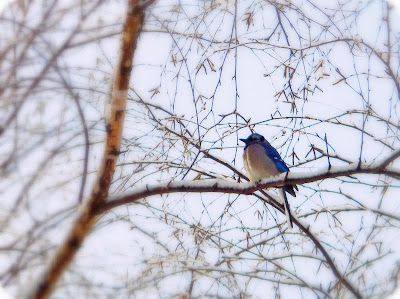 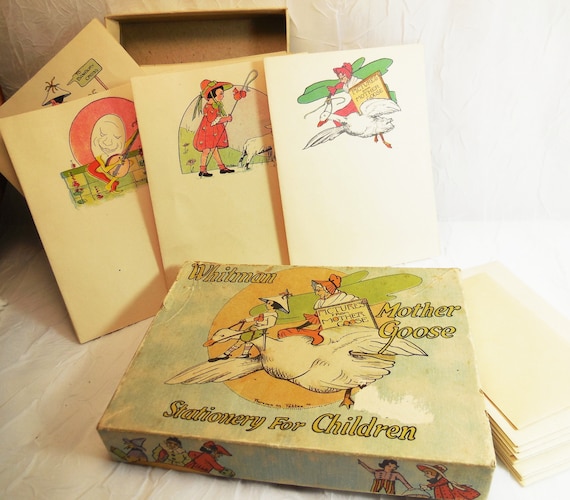 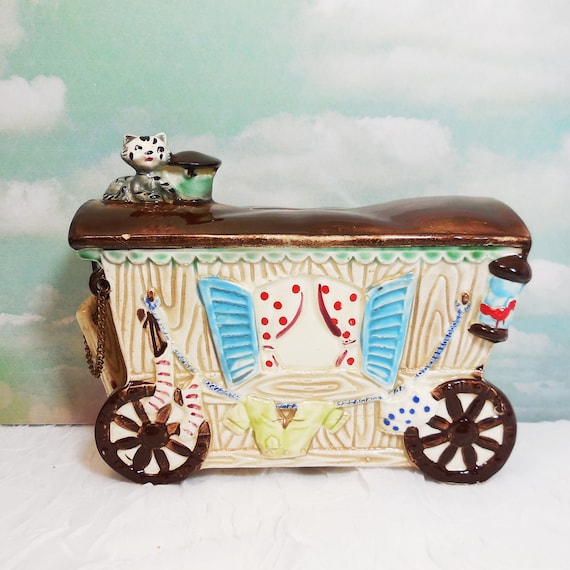